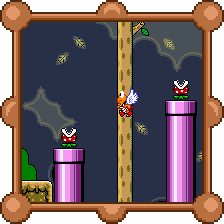 This stage contains lonestarluigi's...lone star. The gimmick, as Kelly is so keen to point out at the start, is that the different types of piranha plants inhabit different colors of pipes. 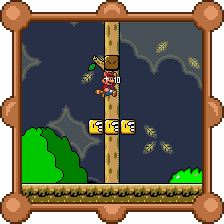 The first 1-Up is hidden above some ? blocks near the start. If you enter the sky bonus section, you could miss it entirely. Unlike other invisible blocks, this one has a short coin trail beneath it as a clue. 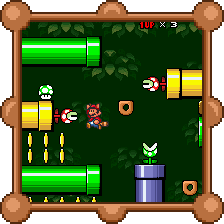 The second extra life is in the second bonus section. You find it through the lower green pipe before the checkpoint. The bonus room itself is fairly hazardous, so navigate carefully! There's also a feather and an RMN coin to be found further up. 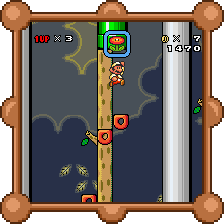 The sky secret is accessible near the start of the stage. If you're fast, you can jump up through the red donut blocks to get inside. The room isn't very safe, but there's a feather and an RMN coin waiting at the end of it.

The original name of this level was "Picky Piranhas" to go along with the gimmick, but lonestarluigi forgot the title before submitting it and improvised with "Pipe Path." It wasn't until after the game was completed and released that he found the level plan with the original title.