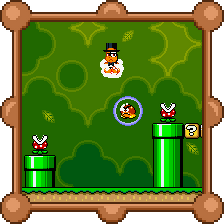 This forest looks harmless, but it's a nasty gauntlet of enemies! There are Goombas, Rexes, Jumping Piranha Plants, Bullet Bills of both sizes, and the man of the hour...the mysterious flying gentleman, Lakitu. He's extra persistent this time around. Even if you fight him off, he'll show up again later in the stage. He can't take more than three trouncings, but man, he just won't give up! 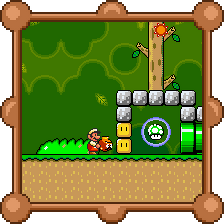 Although the stage contains no leaves, it's still possible to get inside this alcove. Smashing a Goomba into the flip blocks works just as well as a tail would've. 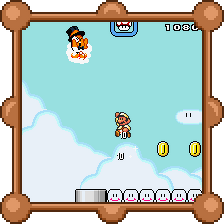 Near the end of the stage, the final yellow flip block contains a vine that leads to the sky section. Acknowledging your achievement, Lakitu congratulates you and tosses down a few blue coins. He leaves a 1-Up when he departs. Maybe he isn't such a bad guy after all. 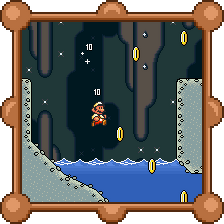 The underground secret can be found through the only purple pipe in the level. Kelly's inside, wondering just what's so mysterious about this Lakitu.

The upper path is completely safe, while the lower path has an RMN coin guarded by some fish. Coming down here causes Lakitu to wait for you later in the stage. 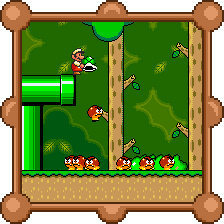 At the end of the stage, a pipe is spawning Goombas into the valley. There's nowhere for them to go, so they'll pile up if you wait long enough. Grab a Koopa shell from earlier and kick it in for an infinite supply of extra lives.

Originally, Lakitu only had dialogue in the sky secret section. However, in post production, halibabica rewrote his dialogue and added more pieces for each time Lakitu appeared. This was done with DarklordKeinor's permission.

The Lakitu sprite was custom made by Ratty524, at Isrieri's behest.

The name of this stage is a reference to Isrieri's Let's Play of Super RMN Bros. 3.