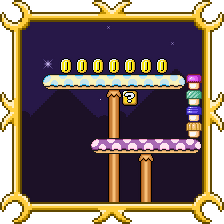 This trippy stage is inspired by the art piece it bears the name of. It borrows its music from the similarly-trippy SNES title, Plok. The portrait hides most of its unsettling weirdness. Many of the mushroom platforms have eyes, and an eyeball cloud chucks goombas at you further in.

Even the music and setting aren't indicative enough of what's waiting at the end. An athletic stage with a boss almost seems unfair, but just try not to panic. 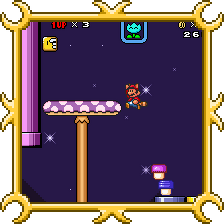 The only extra life in the stage can be found immediately after the other two secrets. Stack a couple of mushroom blocks nearby and jump to this high platform for the 1-Up. Alternatively, you can kick a mushroom block up into the ? block to knock out the shroom, but then you'll have to catch it as it falls. 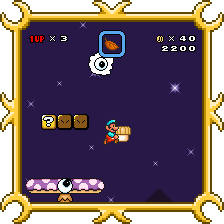 Down the first yellow pipe, you'll find a cliffy bonus room with an ice flower. This is also an early glimpse of the eyeball cloud that will harrass you later. The cloud can't hurt you, but its goombas can, and there's no way to kill it, either. Escape is the only option. 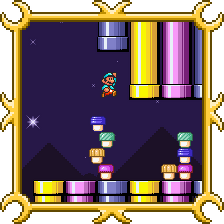 The exit pipe for the first secret is directly below the entrance for the second. Stack the nearby mushroom blocks to reach the higher pipe. You'll find an RMN coin and an extra leaf in the lofty bonus room. 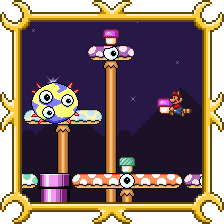 If we didn't know any better, we might think Nova Ball was somehow related to Kracko from Kirby's Dream Land. This freaky bouncing sphere flies around the arena, trying to ram into you. It's safe to jump on, but it won't take any damage from it. Most projectiles are useless, so the main way to beat it is to throw mushroom blocks.

The blocks can also be used defensively, since Nova Ball can't pass through them. Drop a block in front of yourself to deflect it away. It takes ten hits to beat, so fight carefully! Bringing an extra mushroom block from outside is a good idea.

When asked to give a name to Nova Ball, nin8halos chose "Poo Poo Butt Butt." This was disregarded and halibabica went with what Isrieri called it instead.

As all of nin8halo's levels are based off real works of art, Mushroom Supernova is based on the painting Supernova by Takashi Murakami, a Japanese pop culture artist.