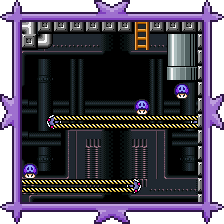 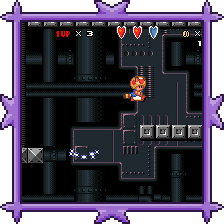 The crushers have edges you can stand on, and several of the stage's bonuses can be accessed by them. The secret section is entered through a pipe you can reach by jumping off a nearby crusher. There's a bubbled 1-Up inside and a whole mess of coins just begging to be POW'd. 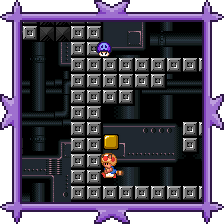 At the end of the first section, an invisible block with a 1-Up can be found against the wall before you exit. 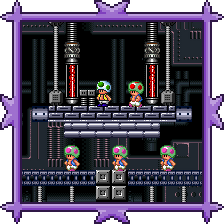 It's the notorious mad scientist Toad from Super RMN Bros. 3, Dr. Toadly! He's come back again to ruin your life...or, he would if he could keep his mouth shut.

The fight isn't so much a battle as it is a monologue. Toadly starts out by greeting you and proceeds to deliver what may be the most ridiculous tirade in video game history. As he chatters away, a pipe falls from the ceiling, drawing ever closer. At the end of his rant, it smashes him, blasting him and his mighty machine to bits.

So, if you can survive nine dialogue boxes, you can win this fight.