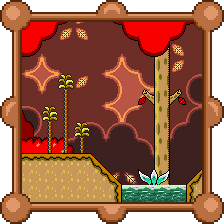 This atmospheric forest takes its name from the Zelda series. The lovely colors of the surroundings give the whole stage a warm feeling. The upbeat music makes for a fun nature hike, though climbing up the big tree is more serene.

Kelly appears inside the tree to advise the player on how to advance, but if you're playing as Link (the level's suggested character), you won't find her hint of much use. 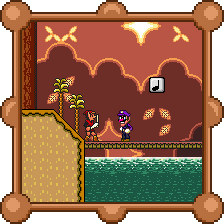 The stage's first 1-Up is at the end of the first section. If you go all the way right and jump, an invisible note block will appear, revealing the area's back portion. Waluigi is here to congratulate you, though no one's sure why. The extra life sits in a ? block above the note block next to him. 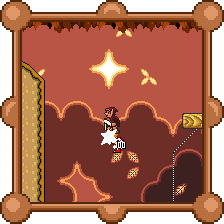 The second shroom is the final section of the level. Jump from the rail lift and bounce off this paratroopa to reach the high ledge on the left. The 1-Up waits inside a bubble there. 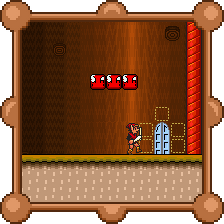 The stage's other "secrets" are more a helpful reward for playing as Link. Since he can't carry springboards to solve the tree's puzzles, he gets access to much easier paths. Taking this door puts him a bit further up the tree, for example. 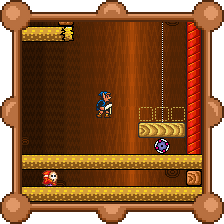 Several of the rail lifts in the tree only activate if Link stands on them. They're his means to reaching the top, so only the Mario characters have to use springboards. Does that make it worthwhile to play with Link's unique controls? Just maybe...

This stage was the final one approved for the game at the closing of the event. However, a last-minute edit slipped through the cracks that wasn't discovered until much later in production. The tree interiors had been a point of contention with the judges for the duration of the final weeks, and the creator made unnacceptable alterations to it that no one double-checked.

However, halibabica still had a copy of the original level. It was changed in minor ways to match improvements from the new version, but kept the tree as it was. The revised stage used Skyward Sword's Faron Woods theme, while the original used Twilight Princess'. In recognition of these events, halibabica kept the Skyward Sword version for the first section and the Twilight Princess version for the last. The tree's theme was always that of the Deku Tree.