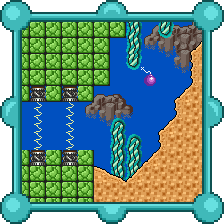 Turtle power! Not only does this stage give you a hammer suit right off the bat, but if you're playing as Mario or Luigi, it's not a hammer suit...it's a turtle suit! Become a sai-chucking ninja turtle!

The whole stage is a throwback to Teenage Mutant Ninja Turtles on the NES. Its design is inspired by the original game, even down to the power-up pizza slices and notorious underwater bomb hunt. Apart from the nostalgia, it doesn't have many secrets. 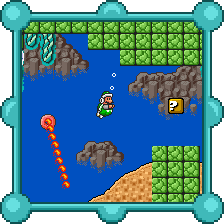 The only extra life in the stage is found on the upper path of the underwater section. Why the shroom is hidden here in a plain block is also due to the original game. The fastest route to disarming the bombs excluded this section of the level, so anyone who followed the routine of the original would miss it completely. 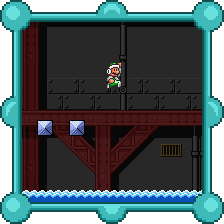 The bonus section can be found down either of the piranha plant pipes at the start. It, too, recreates a setting of the original game. The rewards are an RMN coin and a pizza slice to get you started in the rest of the level. Not the most lucrative prizes, but it's all about memories.