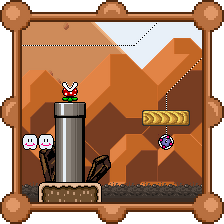 A delicious stage comprised entirely of...earth and boiling filth water. What, you thought it was real chocolate? Nah, just kidding, it is. It's also one of the game's only rail lift stages, which is fine because you never need more than a few of those.

The level itself isn't too tough, but the duration could get you if you're careless. Avoid the Fuzzies and Mario Head Koopas, don't fall in the hot chocolate, and and don't lose track of your lift. 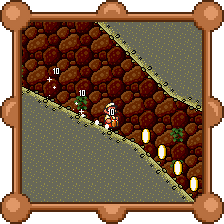 The tall, orange pipe before the checkpoint leads to this underground slope. Sliding to collect the coins seems the best course of action, but the ramp will actually sling you over the last bunch of them if you do. Regardless, there's an extra life in the block at the bottom, and Kelly's waiting outside to tell you where this stage is going. 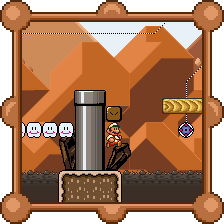 Don't fret if you fall down the side of any pipes. Invisible blocks are hidden along each one to help you get back up. You'll never be stuck in such a way! 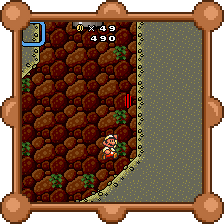 The two pipes after the first rail lift both lead to an underground bonus section. There's a bounty of coins and an extra fire flower if you can spin jump. The red coins indicate hidden blocks that let you get back up to the exit. 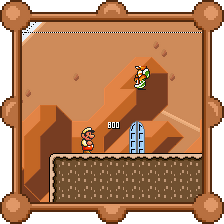 The Hammer Bro on the lone platform has a small secret. If you go down there and defeat him, a door appears. It takes you past the next bit of rail lifts, so it's a nice little shortcut. It also keeps you from getting marooned on the platform.