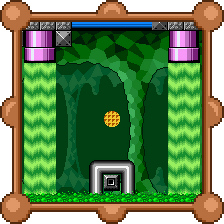 The stage has three distinct paths that can be followed through it: the upper, middle, and lower. The upper requires you to fly and doesn't have much to offer, but it's the easiest path. The lower puts you close to the chemicals, but has some nice hidden rewards. The middle is where you're likely to spend most of your time. 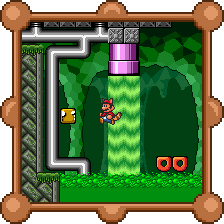 Immediately on the other side of the terrain from the second 1-Up, the tanooki suit can be found inside a plain, ordinary block. You have to take the low road to get it, and you might not think to hit something so inconspicuous. It's one of the easiest suits to nab in the game. 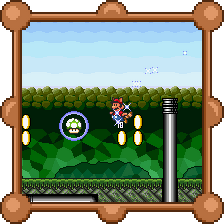 Clear out some of the enemies near the start and make a runway to fly up to the top of the stage. A bubbled 1-Up  awaits you there, as does plenty more flying room. The upper road isn't all that rewarding, but it's much easier to pass over the stage from, and there's almost nothing keeping you from flying the whole way. 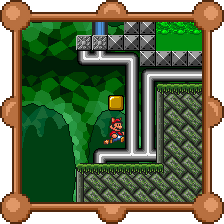 Following the low road, you eventually come to a wall that forces you to the middle path. However, if you jump inside the small alcove, you'll find this block with an extra life inside. 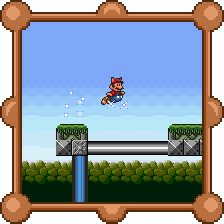 If you fly to the top right of the first section, you'll find another 1-Up waiting in a block, but you also won't have to go back down to advance. All three of the stage's paths end in a pipe that takes you to the next part of the level. 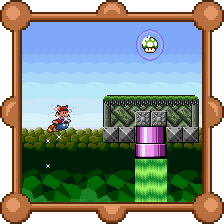 Near the end of the stage, you need to use the stopwatch to freeze the rising acid in place. You can use the long path as a runway to fly up to the final bubbled shroom, but if the watch is still going, it may not be there. SMBX sometimes fails to spawn objects while time is frozen, so just leave and come back if the prize has vanished. 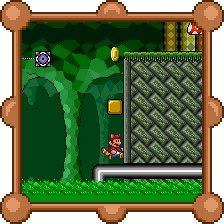 Don't worry if you get stuck on either side of the checkpoint platform. There are invisible coin blocks you can use to climb back up.

The blue pipe seen in the level entry potrait was changed to a lighter color after the picture was taken. Some of the judges felt the pipes looked too solid when they were colored vibrantly, so halibabica dulled them to make them blend into the background better. However, the one in the entry portrait was never changed.