Castle of the Dead 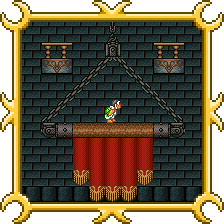 This stage borrows its music from the indie game, Maldita Castilla, which is inspired by the old Ghosts 'n Goblins style of games. The stage is similarly themed, right down to many of its dastardly tricks. Getting through the level is both easier and more difficult than a first glance suggests. The solutions are there, but can you see them?

Keep your wits about you. The castle (and road leading up to it) are packed with hazards for the unwary. 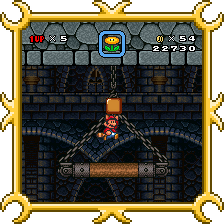 The first extra life is just after the checkpoint in the castle. Use the blocks and platforms to reach this hanging platform. There's an invisible block right where the chains meet. 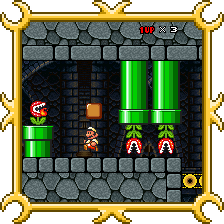 The second 1-Up is just before the boss room. The block's in plain sight, but it's guarded by three piranha plants. It's your reward for braving the dangers. 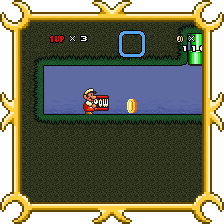 From the start, the second pipe you find can be entered. Inside is a chamber with three more pipes and a cluster of coins on the ceiling. The middle pipe takes you down to an alcove with a POW block. Further below, more coins can be seen along the ground.

It's tempting to use the POW block to bring down the coins in the first chamber, but there's a secret 1-Up to be gained here. Jump (or duck jump) over the first coin to the POW block, then throw it while down there. It'll hit all the coins off the ground and score you an extra life. 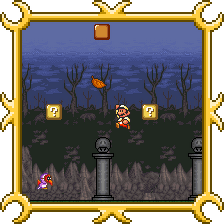 Just before reaching the castle, a hidden block with a leaf sits high in the sky. It's far above the mushroom pillar shown, and reaching it is no small feat. Jumping from the Hammer Bro's Tweeter to reach the other ? blocks is necessary. Why it was hidden so well, only Isrieri knows. 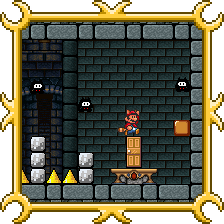 Before entering the door at the back of the castle's first section, an invisible block is hidden against the wall. However, it doesn't contain anything valuable. Rather, a Ninji pops out! Even the secrets seem to be against you here... 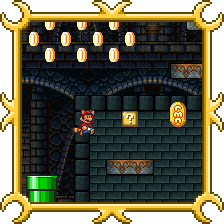 Another bonus chamber can be found through a pipe at the bottom of the final castle section. Once again, it employs tricks with POW blocks. Both ? blocks contain one, but you'd only need one to knock down the coins, which are easy to reach anyway.

Don't be fooled, though! If you use the first POW to knock the coins down, you can use the second to bounce them off the ground. That way, they're worth a 1-Up on their own. If you include the RMN coin among them, you get 2-Up as well! 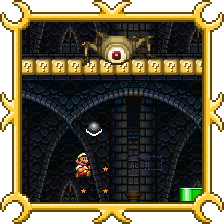 Another Zelda boss! What's it doing here? Ghoma sidesteps back and forth, firing bubbles over the side of its ? block platform. Buzzy Beetles spawn from the pipes above and wander down to you. To beat the boss, you must kick the shells up to bump the blocks.

Timing is the key to victory here. Even if you miss the boss, the block you strike can't be hit again. Get careless, and you'll run out of options fast. Some blocks also contain Hammer Bros. Yikes!

Link can't carry shells, so his boss strategy is different. Use his down thrust to activate the switch block in the floor. Then, he can jump to hit the blocks himself.