Bridge Over the Horizon 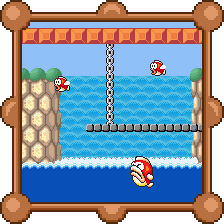 Fish everywhere! It's tempting to run full-tilt through a level where you're being attacked by jumping fish, but it's sure to get you hurt or killed in this one. Taking your time while crossing the bridge is most advisable.

Kelly's even there at the start to warn you about the fish. She also mentions that the orange parts of the bridge aren't solid, so don't let your eyes be tricked. As long as you don't hurry, it shouldn't be too tough for you. 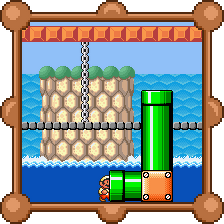 You'll find your dino pal inside this pipe beneath the bridge. There's a gap you can jump insider earlier on, and the bonus room puts you back out of the top. Yoshi can be handy to have along, so don't let him run off and drown! 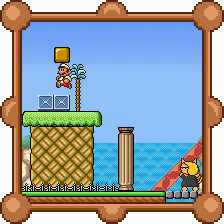 The first secret's right at the start of the stage. Getting up on this ledge requires some momentum, but you'll find the 1-Up in an invisible block if you think to look there. 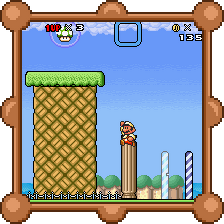 This 1-Up seen near the checkpoint is your reward for taking the high path on the bridge prior. It can be difficult to stay up there with the numerous gaps, fish, and bullet bills flying at you, but you could also try to bounce off something closer to the end of it.

Alternatively, the power-up block after the checkpoint is just close enough that you can reach the 1-Up if you jump with enough momentum. 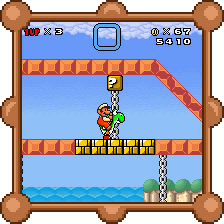 The final 1-Up is part of a P-Switch secret. The switch is inside a block at the start of several rows of coins. Hitting it turns them into platforms that lead to the extra life. Of course, even if you screw it up, you can jump off Yoshi to reach the block. Or bounce off an enemy. Whatever works.