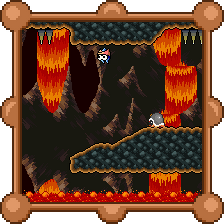 Truly one of the most difficult levels in all of Super RMN World. You'll find yourself riding skull rafts again, but also dodging Podoboos and Yoshis' Island bats. There are tight corridors with spike ceilings, Fire Bros. and bars, Blarggs...the works. And that's just the first section!

The second has you fleeing from rising lava, scrambling past other hazards all the way up. Eventually, your final raft ride is an elevator past pipes firing shells at you. If your climb didn't go well, this part could well be the end of you. 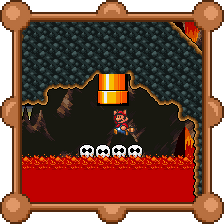 Riding the first skull raft to the very end of its trail takes you to a secret pipe. Inside, you'll find an extra life and another leaf power-up. The chamber exit dumps you right onto the second skull raft, so be ready! 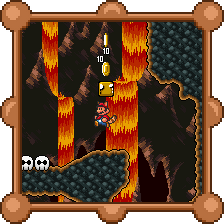 The two ? blocks at the top of the second section are there for speedy players who outdistance the lava. Since you have to wait for the lava to catch up anyway, you can make a few bucks while you do. Of course, Luigi and Link can raid these blocks instantly... 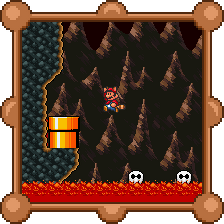 Among the pipes firing Buzzy Beetle shells, one on the left is pointing upward instead of sideways. It leads to a bonus room that's made entirely of ice, and an ice flower can be found inside. The exit puts you far to the left of the final section, and you'll find the final RMN coin along the way.

It was Isrieri who originally recommended the title 'Baleful Brimstone'. This was seconded by halibabica, but masterofmayhem changed it to 'Baneful Brimstone' instead. There were no objections.