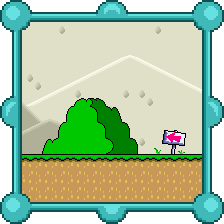 This stage takes the scrolling left gimmick to a whole new level...literally! Not only do you progress left for the whole stage, but back in time through the styles of the old Mario games. The first section is like SMW, the next is SMB3, then SMB2, and finishes off with SMB1. Each section also has a secret, and how many of them you find affects how many RMN coins you can get at the end. It all comes down to the four switch blocks... 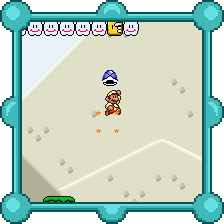 The only extra life in the level is near the very beginning. This block in the clouds can only be hit from below (unless you're Link). It's so far up, you have to kick a shell at it. The ground below is too far down, though, so you have to jump from a nearby ledge to kick the shell. However, if you're moving forward, you'll kick the shell up on an arc instead of straight up. It's tricky to kick it just right, but you can try over and over by respawning the Koopa. 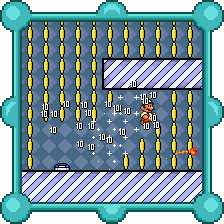 The yellow switch block is hidden in the left of the two pipes with jumping piranha plants. Inside is a switch-palace-esque chamber with a P-Switch and a horde of coins. Leaving through the pipe on the right takes you to the yellow switch. Hitting it turns yellow blocks solid, and you can find mushrooms inside them. They also seal the cliff at the end of the section, so no worries about falling off. 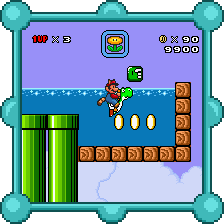 The green switch is at the end of the SMB3 section. Swim up the waterfall and through either pipe. You'll come out on top where the switch is. It's less useful than the others, but you'll get leaves out of each green block you hit. 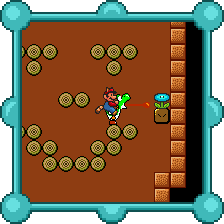 The blue switch is hidden in the only vase in the SMB2 section. Blue blocks produce ice flowers, but the only one you can hit is inside the vase itself.

Also, to avoid ditching Yoshi at the start of the section you need a leaf. Eat all the enemies and get a running start to fly over the wall. 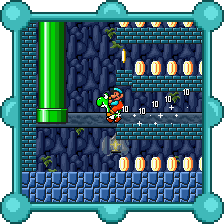 The red switch is...not in the underground secret of SMB1. The first pipe you encounter leads to this little treasure trove, but the switch is nowhere to be found. It's a little further in. 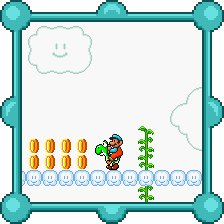 The red switch's true hiding place is in the sky bonus area. You'll find the vine above a piranha plant just before you start seeing red dashed line blocks.

To get Yoshi up here, just jump near the top of the vine. The warp to the sky is close enough that you don't have to climb.

This is the only stage in the game that was allowed to break the rules regarding non-swimmable waterfalls and non-death water. It was permitted this for the sake of its throwback.