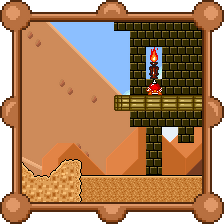 These desert ruins are filled with secrets! Kelly's cryptic advice is the key to finding almost all of them. If you pay attention to the ground, you may not even need a guide.

There are plenty of distractions, though. Fighter flies and spike tops are swarming everywhere. Bandits will rush at you, and sand pits threaten to pull you down. Red coins indicate trick floors that fall out from under you. Keep an eye out for secrets, but be careful! 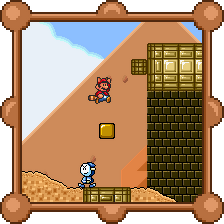 The darker shades of stone are literally floor tiles a shade darker than the regular ones. Every block in the stage has a darker tile underneath it, including invisible ones. So, if you see a dark tile with nothing above it, something's hidden there!

The first 1-Up can be found this way. Getting on top of the building is much easier with this invisible block. The extra life is in a normal block up there. 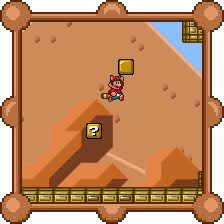 The second 1-Up is hidden near the end of the first section. Before you enter the pipe, you can see two dark spots in the floor. The first block is easy to hit, but the second is positioned in a tricky spot. Hitting both to make stairs can be tough. You might have better luck flying instead. 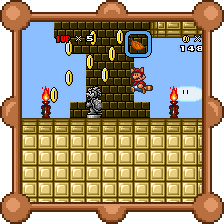 The third 1-Up is on the way to the end of the level. This bunch of coins forms a conspicuous arrow pointing up above the ledge. Sure enough, you can jump up there and run to the right. A big string of coins leads to the extra life in a bubble at the bottom. If you have a tail, you can easily bag all the coins on your way down. 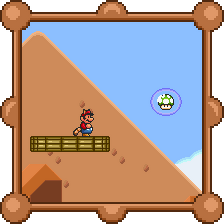 The final red coin platform is a good one to ride on. It carries you down past the fourth 1-Up if you do. 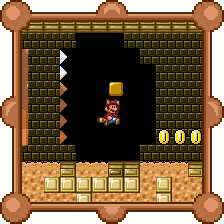 The final 1-Up is at the very end. One last hidden block hides above a dark spot in the floor. If you couldn't decipher Kelly's hint, you'd never know it was there. 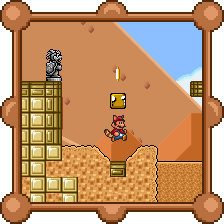 More hidden blocks above dark floors can be found throughout the stage. The first appears very near Kelly, though it only contains a handful of coins. 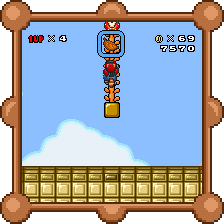 In the second part of the stage, a vine block is hidden on the roof of the building. It leads to a sky bonus with tons of cash and an RMN coin to boot. 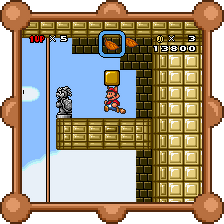 At the top of the final building in the second section, an invisible block with a leaf hides behing a Bowser statue. If you got here without one, it can be handy for the descent to the third 1-Up.

During the event's submission period, this level was originally named "Aztec Architecture" as inspired by the name of the BGM that plays in the level. However, nin8halos pointed out that the visual style of the level did not relate to real Aztec architecture, so seiromem changed the name to "Arid Acropolis," following another contributor's suggestion.