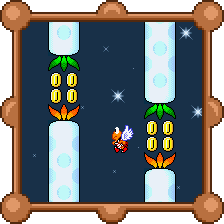 Carrots are those strange white spotted things jutting into the night sky. This level is themed after a bonus stage from Super Mario World. Like the original, you'll get a special red Yoshi at the start, but it's the only one in the stage!

There's a second Yoshi hiding in a pyramid of blocks later, but it's a plain ol' green one. He's still a good friend, though! 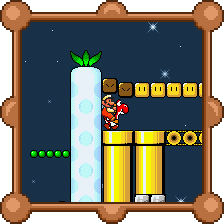 The stage's 1-Up shroom is hidden in the first of these yellow flip blocks. You have to head all the way right and brave a jumping piranha plant on the way back to get it. Link could just give the block a down thrust, though. 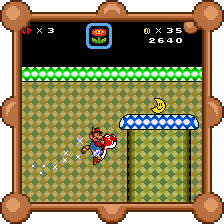 If you can keep a Yoshi all the way to the end of the stage, you can snag one of the blue paratroopas and fly to the 3-Up moon under the exit. This is pretty much the only way to reach it, so it'll only tease you if you don't think to fly with Yoshi. 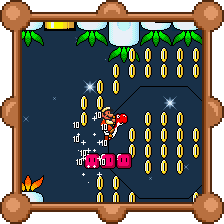 This secret is hidden mere tiles away from the first 1-Up. It may look like the pipe that goes all the way down is correct, but the one with the stone blocks at the bottom is the real secret. It leads to a fun little bonus room with plenty of cash. Cha-ching!